Poet Laureate of the IWW

Joe Hill, a Swedish born, American labor activist and songwriter, wrote union songs for his organization, the Industrial Workers of the World (I.W.W.), popularly known as the “Wobblies.” The I.W.W., an international union, advocated direct action in the form of boycotts, strikes and sabotage. However, adversaries of the I.W.W., including some historians as well as industrialists, government officials, press and religious organizations perpetuated the idea that I.W.W. members were dangerous terrorists. Almost from the founding of the organization, their philosophy and tactics aroused intense fear and hatred by those in power. The I.W.W. garnered significant publicity during the western free speech movements of 1906-1917, resulting in hostility and fear directed toward them, unparalleled in American history.  I.W.W. positions advocating class conflict and revolution in provocative language that mocked societies’ sacred cows of patriotism and religion contributed significantly to officials’ concern about labor conflicts. 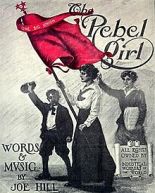 Joe Hill joined the IWW in 1910 and wrote songs to encourage his fellow workers to join in solidarity to fight for their rights. His songs were first published in the March 1916 edition of the Industrial Worker in the Little Red Songbook. During his lifetime, Joe wrote over thirty songs, including Casey Jones, The Preacher and the Slave, Dump the Bosses off Your Back, Rebel Girl and There is Power in the Union.

In a controversial trial, a jury convicted Joe Hill of murder. Despite appeals and international calls for clemency, the state of Utah executed Joe by firing square in on November 19, 1915. Professor Ron Yengich and his students have posted a website, The Joe Hill Project, on Joe’s life and the trial.

Writing in his cell, November 18, 1915, on the eve of his execution, Joe addressed his fellow workers,

My will is easy to decide,
For there is nothing to divide.
My kind don’t need to fuss and moan —
“Moss does not cling to a rolling stone.”My body? Ah, If I could choose,
I would to ashes it reduce,
And let the merry breezes blow
My dust to where some flowers grow.

Perhaps some fading flower then
Would come to life and bloom again.
This is my last and final will.
Good luck to all of you.

Joe’s remains were sent to Chicago where thirty thousand people attended his funeral. Envelopes with his ashes were sent to I.W.W. chapters and supporters, and on May Day 1916, friends and members of his union scattered his ashes in every state and throughout the world. In 1988, an envelope seized by the United States Post Office turned up. Labeled as “subversive potential,” the envelop was left at the National Archives. Members of the I.W.W. in Chicago laid claim to the contents. Several stories in I.W.W. lore claim that theses ashes were then scattered. However, it seems that one bit of Joe’s ashes was not cast to the wind but rather held at the union headquarters. I was asked to make an urn to hold these last remaining ashes. 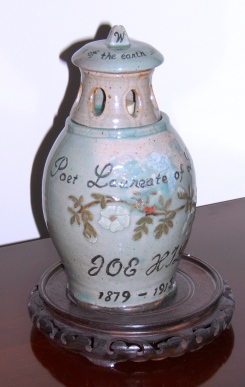 Joe’s immortal words have been the rallying cry and inspiration to union and labor organizers ever since.

Joe Hill’s songs can be played from this website, Songs of the Wobblies.