Bilbao, Spain, once an industrial center now claims their fame as home of the Guggenheim Museum of Contemporary Art. My first impression: the building was an architectural marvel, made from titanium, limestone and glass, designed by American architect, Frank O. Gehry. On the patio that follows the river, the Tulips Exhibit by Jeff Koons offered a lively and colorful display on a rainy day. 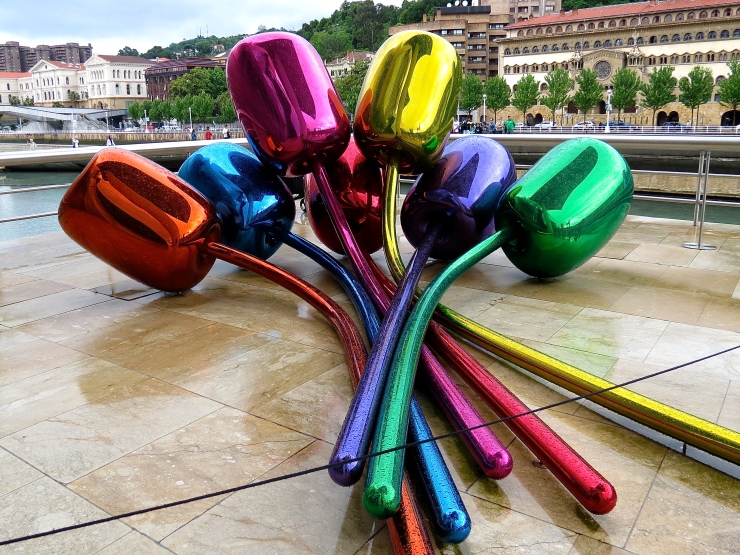 While in Spain, I enjoyed watching the many street performers and their interactions with visitors.

One of my favorites, took place at the Plaza Mayor, in Madrid, as two little girls interact with a “goat.”

As a supporter of anarcho-syndicalist movements, which advocate for democracy for the working classes in politics as well as the workplace, I’ve been following the news about the strikes against the Spanish government’s spending cuts, which create severe consequences for workers and their families. Following these events, I came across one of their leaders, Sister Teresa Forcades.

Sister Teresa, who confirms that her Church is misogynistic and patriarchal, has a Facebook page here: https://www.facebook.com/Forcades?hc_location=stream if you don’t mind using Google translator for Catalonia into English.

For folks who have their doubts about capitalism, Teresa has launched a political manifesto to counter austerity measures by the Spanish government. The document calls for an independent Catalonia to carry out a more democratic and progressive agenda, including nationalizing banks and energy corporations.

On my first evening in Barcelona, I’m going to an event, Women, Spirituality and Social Change, a dialogue between Teresa and Lekshe Karma Tsomo, a California Tibetan nun, who share the same commitment: to promote social change based on inner transformation.

If you might travel to Spain or if you have been there and would like to compare notes, please check out my page here where I have pictures and video of Sister Teresa at the event I attended.  I also chronicle a trip to the Northern provinces, which will include commentary on politics, cuisine, language and art.

I will occasionally do a post, but for the most part I’ll be updating the web page. Thanks for checking it out!