IceWorks in Aston, is fortunate to have three Olympic ice dance teams that practice at their skating rinks. I have to say that one of the thrills of a lifetime for this beginner ice dancer is to have actually shared practice ice sessions with these skaters.   I have watched their practice sessions, some of which the skaters drill together: they actually “run” across the ice, fall into a squat position while positioning one leg behind, leap back into the air, repeat several times and finish with push ups on the ice. What always surprises me is how incredibly fast they skate.  Television cameras cannot capture the speed.

On the Sunday after the recent “snowmeggedon”, we attended a celebration send-off  to the Olympics for the skaters. Using video taken several days after the storm, I combined local snow scenes with the exhibition skating into a tribute video.  I wish them all happiness and success as they bring such joy and artistry to the ice for those whose of us who love the sport.

Tanith Belbin and Ben Agosto, Russia’s Oksana Domnina and Maxim Shabalin, and Italy’s Federica Faiella and Massimo Scali will be skating in Vancouver from February 20 through the 22nd. All are coached by Natalia Linichuk and Gennadi Karponossov, who won an Olympic gold medal in 1980.

View from the sidelines with my skating pal, Claudia.

Fans at IceWorks cue up to collect autographs. 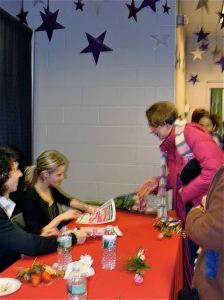