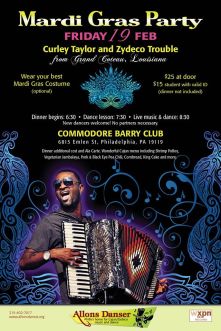 Until a few months ago, I never even heard of Zydeco. A friend suggested that since I’ve been exploring the dance scene, that I might try Zydeco.  First, I had to find out–what is Zydeco? Zydeco originated in southwest Louisiana in the Creole culture. Creole folks descend from various nationalities including Haitian, Native American, French and Spanish immigrants. The music usually has a fast tempo, and the main instrument is the accordion accompanied by a washboard, guitars, violins and drums. Elements of R&B, rock, soul and other music genres have worked their way into Zydeco performances.  According to Wikipedia, Zydeco is similar to Cajun music but has has a harder, faster sound that features a rhythm that shifts accents to weak beats.

I’m certainly no expert on the music, but seems that the music has a recognizable sound, and the beat is so strong that it is hard to resist moving to the music.

At the Friday night Mardi Gras Party, the evening started with a dance lesson, which is typical for the Allons Dansor venues. I usually show up early for the dance lesson, as it is a great way to get moving, to review the steps and to meet the newcomers. The steps are easy, and by dancing as a group, no need to feel self-conscious. Eventually, the gender lines form partnerships to practice the closed position.  Partners switch out when the instructor introduces a new step.

A short video shows the introductory steps and then the dancing with live music from Curley Taylor and Zydeco Trouble.

Halloween and Mardi Gras have elements in common: religious origins, costumes, masks, revelry. Halloween has its origins in the festival of Samhain when the Celts would light bonfires to mark the beginning of the winter after the harvest time. On All Hallows Eve, as it is during Mardi Gras, the boundaries between worlds of reality and fantasy blur, and supposedly otherworldly spirits roam the earth.

This joyful music from the swamps of Louisiana can be played for a sultry slow dance. The word Zydeco derived from mispronouncing the French phrase: “Les haricots ne sont pas sales,” translated as, “the snap beans aren’t salty” and means, “I don’t have any spicy news for you.”  The video, however, does offer spicy news of such a slow dance on a Halloween night. Music by The Bayou Brothers!