Awhile back I wrote a post on steampunk and the 1987 television program, Beauty and the Beast, which carried many of the steampunk themes. The costumes, setting and the intersection of fantasy with reality connected the program to the steampunk genre, combining science fiction and fantasy, with overlaying elements of the Victorian era and industrialization, especially the influence of steam power.

In this post I add a bit more to the discussion on steampunk with reflections on a graphic novel, pottery and photography. 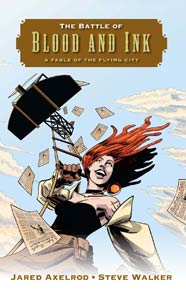 Jared Axelrod and Steve Walker have written and illustrated a cleaver graphic novel with a steampunk setting: The Battle of Blood and Ink.  An entire city flies through the sky, which is not an unusual scenario in steampunk literature, where often castles travel through the universe. Ashe, the courageous heroine, sets out on an adventure to discover the secret of how their government officials capture the energy to fly the city. Ashe publishes a newspaper, The Lurcker’s Guide to Amperstam, proving that the pen is mightier than the sword.

Ashe wears an outfit that includes steampunk fashion elements: a corset, bustle and amulet. Steampunk breaks from the Victorian aesthetic allowing creative takeoffs to flourish. Her skirt is short for Victorian standards, and the boots are substantial, appropriate for a high-flying crusading reporter. Ashe is a woman who embarks on a journey into a world unlike anything we’ve ever seen and is dressed for the part.

This photograph recreates Ashe’s steampunk dress and backdrop with a remarkable likeness to the graphics in the book.

Ashe and her pilot, speed through the clouds on an airship that models steampunk apparatus, replete with propellers and mechanical engine. Steampunk’s approach to technology combines futurist possibilities with 19th century machines. Flying contraptions have a long history in the pre- and post-Victorian era, representing the possibilities of new adventures through technological innovations, and in this case, with Victorian flourishes etched on the sides. 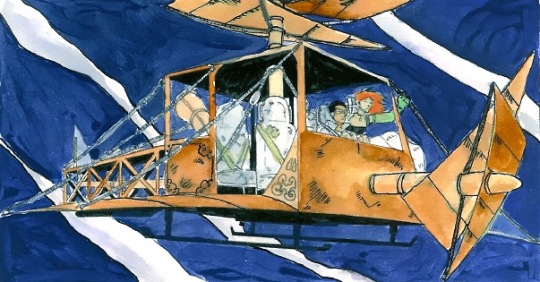 Today artists capture the visual aspects of steampunk ideas in pottery and sculpture. These industrial-inspired ceramics can be adorned with gears, keys, chains, pipes, clocks and a variety of industrial antique components. In most of these pieces I used metallic black glaze, which leaves a golden metallic sheen. By adding the elements of steampunk, the pieces become lively and interactive. Displayed on Victorian needlework, the industrial pottery juxtaposes the softness of delicate fabric.

Steampunk images are easy to find, but capturing them in an artistic view proves to be more challenging. Here are several photographs that capture some aspect of steampunk, whether it is the nuts and bolts on the Eiffel Tower or a battered industrial machine left in the ruins of an old mill.

Have you been inspired in some way by the steampunk themes?