About a mile south of the Mason-Dixon Line, the historical boundary between Maryland and Pennsylvania, the town of Rising Sun rests in the quiet farmland of Cecil County. According to the town’s Facebook page:

The Missouri Compromise of 1820 created the political conditions which made the Mason-Dixon Line important to the history of slavery. It was during the Congressional debates leading up to the compromise that the term “Mason-Dixon line” was first used to designate the entire boundary between free states and slave states.

No Civil War battles were fought in Cecil County, but Frederick Douglass, on his escape from slavery, passed through Perryville, about ten miles south of Rising Sun, and then continuing by train to Delaware.

The Rising Sun Historic Preservation Commission sponsored the Annual Rising Sun Civil War Re-enactment, in partnership with Company A 37th Regiment, North Carolina Volunteer Troops. Over 500 local school children visited the encampment to view the demonstrations. The historical reenactors set up vignettes inside and outside their tents with artifacts and antiques from the time period. Danea Selby portrayed Catherine Virginia O’Connell, sharing her family history and homeopathic treatments. 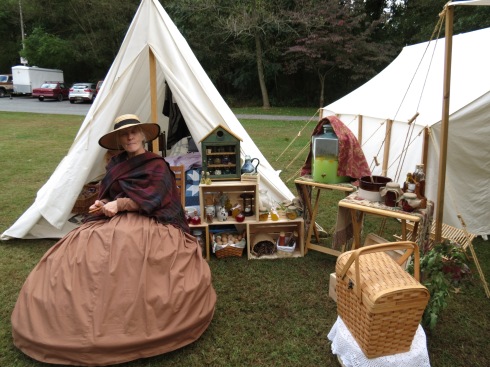 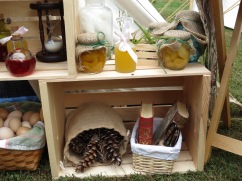 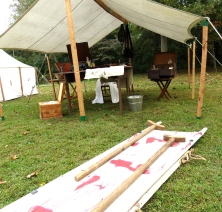 The Preservation Commission treated the reenactors to a full-course dinner on Saturday night. Both reenactors and guests danced at the Civil War Ball, held on the moonlit night. Music by Kaydence, featured traditional folk music with instrumentation that included guitar, concertina, flute, fiddle, mandola, banjo, and penny whistle. Tom and Lesley Mack, who called the dances, represented the Shenandoah Valley Civil War Era Dancers. A quote from their Facebook page says it best,

a dance was a chance for everyone to be cheerful in order to forget the raging war even for a few hours. It was a place to meet neighbors, friends, or newcomers and enjoy the music and dance of the time.

Near the end of the evening, reenactors fired the cannon one last time. 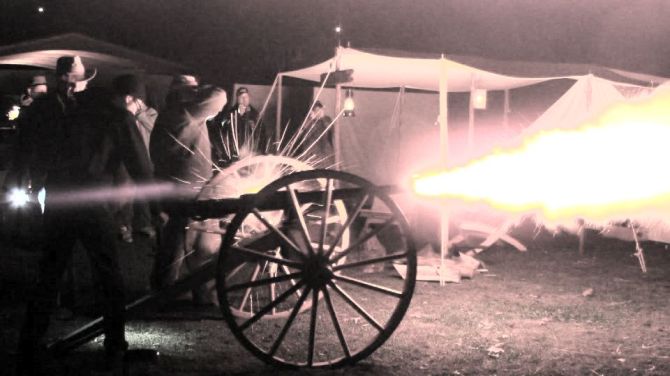 Living History: Day in the Life of the Soldiers of the Civil War

On a visit to Wilmington  & Western Line, a steam train that runs through the Red Clay Valley in Delaware, I just happened to have the good luck that Civil War living history reenactors were staging a battle and takeover of the train on that day. I recorded the dramatic action of the battle in video in this post: Steam Train Journeys into History: Civil War Skirmish at Red Clay Creek.

I strolled by the rows of canvas tents, the Union on one side of the creek and Confederates on the other, as wood crackled in the campfires and coffee brewed in tall metal pots. Reenactors portrayed surgeons, tradesmen, as well as soldiers. Even children dressed up in period clothing. The sound of a blacksmith hammering echoed through the park. I spoke with reenactors, who shared their knowledge on weapons, lanterns, desks and tent contents, everything authentic to the time period.

At midday the gray and blue soldiers faced off in a skirmish. The Union held the high ground while the Confederate soldiers crossed the bridge and positioned their cannon on the field. Soldiers on both sides fired their cannons as thunderous blasts echoed through the landscape, smoke drifting over the hills. As men fell, a field doctor bandaged up the wounded. A crowd of spectators sitting on the hill watched intently as the action unfolded just yards away.

Late in the evening, as music of Kadence spilled into the cool night air, I wandered around the grounds in the light of the campfires and lanterns, softly illuminating the tents. Reflecting on the gentleness of the night and the harshness of the daytime battle, I considered the issues of preserving the Union, regional loyalty, justification for war and the abolition of slavery, which remains the greatest arbitrator in the ethical debate. Has the country evolved into a compassionate and empathetic to the plight of both sides?  I see these reenactments as an opportunity to ponder these issues.

Many thanks to John and all the Reenactors.

Other links to Civil War posts:

Civil War Living Historians at Edgewood Plantation: Haunts of the Past