Chinese Workers Resist Exploitation in Production of our Electronics

For many years now, a social justice movement has been underway to create awareness the working conditions and wages of  farm and migrant workers who pick the fruits and vegetables that we eat. According to the report, “Toward Social Justice and Economic Equity in the Food System,” the public is increasingly attracted to goods produced under socially just conditions.” Fair trade and sweatshop-free products have become popular with consumers.

But what are the conditions that workers face in the manufacture of our electronic devices, and what is our responsibility as conscientious consumers to support fair workplace practices for these workers?  Do we think the skill levels required to work in this field would offer fair pay and good working conditions? I believed that the stunning success of the iPad, which Apple sold over three million in three days back in November 2012, would benefit their employees, as well as their stockholders. What I learned was that Apple uses an intermediary company, Foxconn, to manufacture their products. While Apple has a positive image as an employer, Foxconn employment practices have come into question.

Ironically, Apple reported that, “we’re working hard to build more quickly to meet the incredible demand,” but the question raised here is exactly who is working hard and are these workers pushed to the extreme to meet the marketing demand? 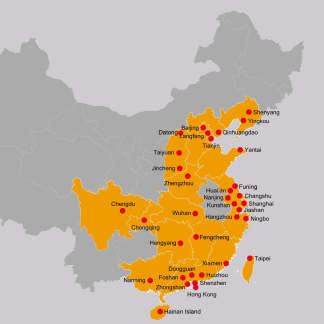 Unfortunately, conditions in many of these plants operated by Foxconn in China, as well as in other countries, reveal that many workers are subject to exploitive practices.  In April 2011 the story broke that seven Chinese workers had committed suicide. The Guardian reported that Chinese sociologists condemned workplace practices that served as a “model where fundamental human dignity is sacrificed for development.” The article continued . . .

In Shenzhen and Chengdu a joint Foxconn workforce of 500,000 is providing the labour that, in the first quarter of 2011, contributed to Apple Inc net profit of $6 billion (£3.6bn). Interviews with mainly migrant employees and managers have laid bare the dark side of those profits: a Dickensian world of work that would be considered shocking in the west.

To bring attention to the problem of worker exploitation in these factories,  on April 21, 2013, The Wooden Shoe,  IWW and Solidarity sponsored an activist from Germany, Ralf, to speak in Philadelphia.

Ralf’s talk was based on gongchao.org’s collective research and activity around the struggles of migrant workers, and he presented photos and films to explain the situation at Foxconn. Ralf focused the discussion on ways to support the iSlaves, relating their struggles to our own labor issues. Formed in September 2008, gongchao researches and documents labor unrest and social movements in China from the perspective of class struggle, migration, and gender. The website offers both analytical texts and workers’ stories.

While the web has a number of resources and webpages on working conditions in China, hearing the stories first hand from Ralf brought the reality closer to home. In the coming weeks, Ralf will be in Washington, Detroit, Chicago, Madison, Saint Paul, Minneapolis, Seattle, Bay Area and Los Angeles. You can click on this link for the details of his schedule.

Anarchism: Political philosophy advocating that people are better served if they make decisions for themselves and communities rather than from any form of centralized power structure.

IWW: Industrial Workers of the World, member-run union for all workers.

Jemima Kiss, “The Real Prices of an iPhone 5: Life in the Foxconn Factory,” September 13, 2012. Apple and Foxcoon: Work Conditions, Problems and Changes.

Cecilia Marquez ’11, PhD candidate in History at the University of Virginia and a key student leader in the struggle for a living wage for UVA employees, engaged students in an interactive discussion about the history and context of the campaign at UVA, strategies and tactics employed (including a historic hunger strike, which received widespread media attention), and the successes and shortcomings of the campaign thus far. She contextualized the struggle at UVA within a larger climate of living wage and union recognition campaigns happening at universities all over the country.

Cecilia covered specific topics in campus organizing, such as how to effectively organize with campus staff and foster student-staff solidarity, how to run an effective media campaign, how to make decisions about tactics in a campaign, and how to negotiate with college administrators.

For more information, check out the Living Wage at UVW webpage here. Swarthmore Labor Action Project (SLAP!), which monitors wages since the College implemented increases since the Swarthmore College living wage campaign in 2005, sponsored the event.

Some pictures and video from the evening’s discussion. 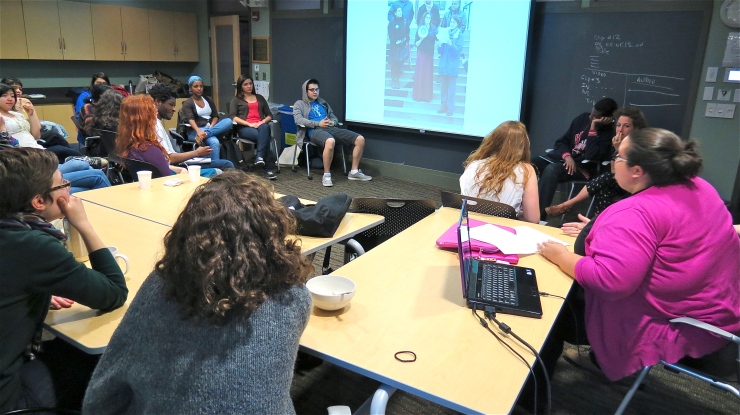