Steampunk & the TV Beauty and the Beast

Steampunk: What is That?

For those unfamiliar, steampunk combines elements of science fiction and fantasy overlaying elements of the Victorian era and industrialization, especially the influence of steam power. Steampunk literature features futuristic innovations as Victorians may have envisioned them. Fictional machinery that H. G. Wells or Jules Verne invented for their novels are models for steampunk. The steampunk genre presents a romantic idealization of the 19th century and an escape from modern realities. Steampunk culture values a more formal approach to manners and dress. So how does the punk fit into this retro-genteel world?  Punk loosely references the cyberpunk style with anti-establishment sentiments. Various sub-cultures of punk have evolved since the late 1960s, but it seems the common thread of non-conformity weaves through most of  followers’ ideology.

Steampunk fashion models after the imagery created in the genre’s literature. Victorian attire provides the basic starting place, and the clothing can mimic outfits of an explorer, officer, scientist, gazetteer or just something any one of Dickens’ characters might have worn. Suits and vests and military coats are favorite apparel items associated with the steampunk culture.

Especially note the gentleman’s hat, for this is where Victorian meets the technology. The hat, which is electrified, tells time! One of the most delightful aspects of steampunk is that wearer and the viewer both experience enjoyment over the inventions. Steampunk fashion undergoes constant change as fans naturally incorporate diversity in style, making each outfit unique.

Below are several examples of steampunk elements in wedding attire. 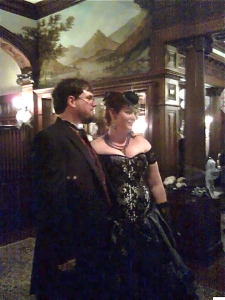 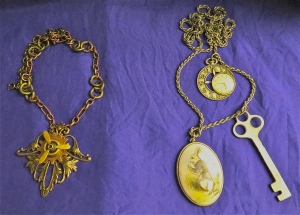 Steampunk culture encourages everyone to find their own interpretation and invention. This philosophy holds for creating all sorts of inventions as accessories or props, which may or may not actually work. This is one aspects of steampunk where I find comfort:

Anyone who enjoys going against the authority and standards of society is going to enjoy the clothing that this type of society loves. There are no rules or guidelines whatsoever.       http://www.buysteampunk.com/

Claiming to be the greatest steampunk festival in the world, Yesterday’s Tomorrows: Steampunk World’s Fair was held in Somerset, New Jersey, in May 2011. A lovely assortment of costumed people filled the rooms, and stores displayed everything from electrified gadgets to elegant jewelry. CBS News did a short piece on the Fair, and about 20 seconds into the video a report interviews a certain young woman above about her “supportive” apparel.

Beauty and the Beast: The Television Series ~ Link to Steampunk?

Before I ever hear the word steampunk, back in 1987 a new television series appeared on the scene that had all the elements of steampunk, Beauty and the Beast, starring Ron Perlman and Linda Hamilton. The clothing, setting and the intersection of fantasy with reality all connect the program to the steampunk genre. In this telling of the tale, New York City sets the stage for the drama with Catherine, the beauty, residing “where the wealthy and powerful rule” and the Beast living below the subways in a tunnel community.

Many elements of the program offer evidence of the link to steampunk. The Beast’s clothing could best be described as Victorian–he did wear a cape, after all. Sometimes his outfits included a large metal or leather belt, a break from the straight Victorian look. His home in the tunnel world consisted of arched chambers of cinder blocks and cement, and pipes lined the walls. These stark industrial scenes contrasted with his room, lite by Tiffany-style lights and candles with books piled high, and where a huge semi-circular stained glass window served as a backdrop. Bronzed statues, old-world globes, and even a huge time piece contributed to the room’s ambiance. As Catherine leaves the tunnels the first time she experiences this new world, Vincent takes her hand as she jumps over a crevice filled with steam rising from below. In the first episode, “Once Upon a Time in New York City,” Vincent reads to Catherine from Charles Dickens’ Great Expectations, a popular 18th century novel. 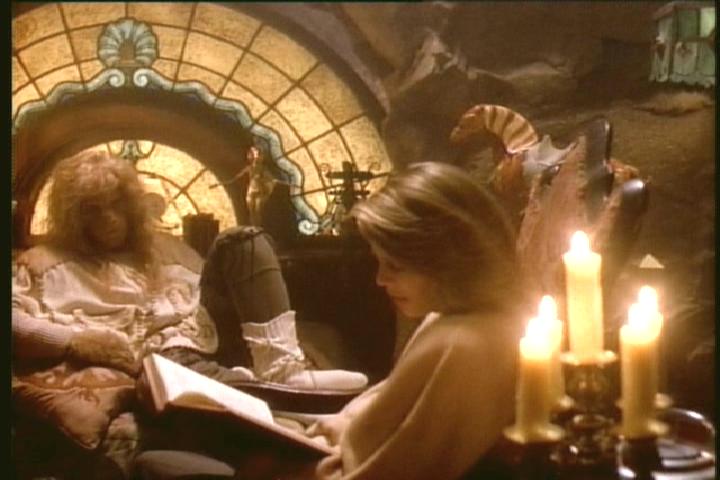 And just like a theme in a Dickens’ story, Beauty and the Beast juxtaposes two social classes, as Vincent explains,

We’re below the city, below the subways.  There is a whole world of tunnels and chambers that most people don’t even know exists.  There are no maps to where we are.  It’s a forgotten place.  But it’s warm and it’s safe, and we have all the room we need.  So we live here and we try to live as well as we can, and we try to take care of each other.

Vincent cares for Catherine, who is left for dead after thugs attack her. After her stay in the tunnels, Catherine transforms from a wealthy socialite and corporate lawyer to a position of assistant district attorney where she believes she can help people.

Fantasy Transforms into a Small Piece of Reality

Steampunk as a genre is fantasy that has an effect on reality through fashion and culture. In the same way the fans of Beauty and the Beast transformed fantasy into reality. Although the program lasted for only a few seasons, the devoted fan following grew and remains the legacy of the program today.  One of the projects the fans undertook was to sponsor a bench in Central Park near what was supposedly was one of the entrances that Vincent used to the tunnel world. I have a certificate from the Central Park Commission thanking me for my contribution.  I made a pilgrimage there to find the bench.  The inscription reads:

“Even the greatest darkness is nothing,
so long as we share the light.”
Beauty and the Beast (TV)  1987-1990
Dedicated by its devoted fans.

Every year the fan community holds a cyber “Winterfest” that can be found here. Fans have created web sites, art, literature and hundreds of videos on YouTube.

The creators of the show must have had some sense of the magic that could be created by a time-space warp: folks living in another era right beneath the feet the power mongels. The audience enjoys the prolonged romantic courtship of Catherine and Vincent that allows the heroine to pursue her own goals and ambitions without the constraint of a social relationship and its complications in the modern world. Vincent guides both Catherine and the viewer through a labyrinthine of chambers and tunnels, away from the impersonal and greedy world to a community that offers companionship, warmth, and comfort in the form of a subterranean sanctuary with a bit of Victorian flare.

So whether it be finding an accessory from the Victorian age or watching favorite episodes of B&B, I’ve enjoyed the trip as a passenger on that steampunk train.

Giving thanks on Thanksgiving? No thanks!